Decorative bird feeder or even a place where insects can visit the local watering hole.

I found these bright and colorful plates at the local Goodwill store and thought they would brighten up a flower bed or two. 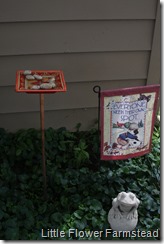 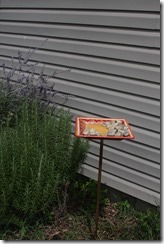 I put pebbles in the dishes so bees or butterflies could safely land on the pebbles to drink. You could put bird seed in them but I would attach a dowel or stick so the birds could land easily or just a pretty plate in your garden! Enjoy! 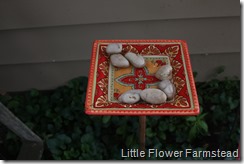 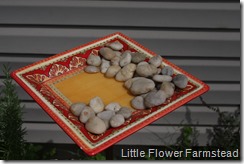 Supplies you will need for one plate:

Sand the end of the copper pipe down with 80 grit sandpaper then switch to 120 grit sandpaper so the plate will easily slide off for cleaning. An orbital sander works well. 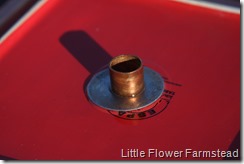 Posted by Little Flower Farmstead at 8:10 PM No comments:

Zippy was a product of the summer storms. There were many trees down in my parents yard. My mom found him under his nest that had blown from the tree during the morning storms. 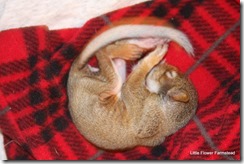 I had raised baby opossums for the conservation department years ago and baby sat sparrow hawks while they went on vacation and red foxes that were just on the cusp of being ready to release but never a squirrel. It is very important to do everything you can to reunite with mom but he was already chilled and even the squirrels were confused trying to take their regular path in the trees and suddenly it was no longer there.
So Zippy came home with us.As of yesterday he has been with us one month.
We started him on Esiblac for puppies and then mixed that half with Henry’s Pets formula for squirrels when it came in. Never feed baby squirrels any other formula but the Esiblac for puppies. There are horrific pictures of well intended people feeding them evaporated milk or cow’s milk!
I also ordered silicone nipples for cheap off of Amazon and o-ring syringes they are the best to feed any animal with as they don’t stick like regular syringes and can be used multiple times. 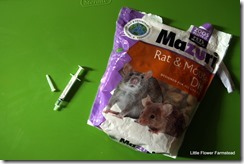 He is approximately 5 weeks old now with lower incisors and eyes wide open! He has transitioned to a medium pet taxi with a water bottle and a few “safe” toys. He likes to nibble on the rat blocks that have all the nutrients they need while in captivity. Today I need to get a small animal mineral block for him
It is very important when they are weaned off formula at about 8 weeks old to supplement for calcium as gray squirrels like Zippy and any squirrel in captivity can die from Metabolic Bone Disease. It is very rare in the wild. This is a great place for resources. http://www.orphanedwildlifecare.com/squirrelcare.htm#7
Here are a few pictures of Zippy from last week. We are going out today for some more fun so stayed tuned for more. 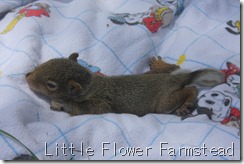 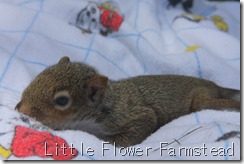 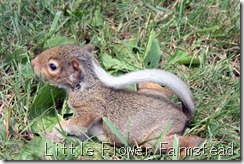 First time above last week Zippy is able to curl his tail over his back! Yeah!
Posted by Little Flower Farmstead at 11:04 AM No comments:

As if June isn't warm enough!!!

I have been wanting to post my winter project yet I wait till June to do it!!

This is an easy pattern from Yarn Harlot   http://www.yarnharlot.ca/blog/archives/2006/10/12/one_row_handspun_scarf.html

I made it out of Noro Keuryon yarn with angora. Super soft. 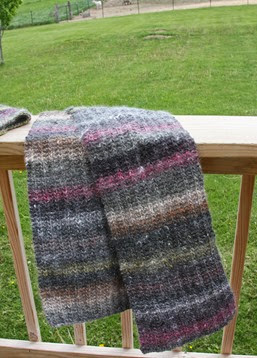 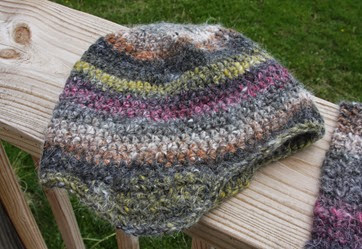 Posted by Little Flower Farmstead at 12:45 PM No comments: 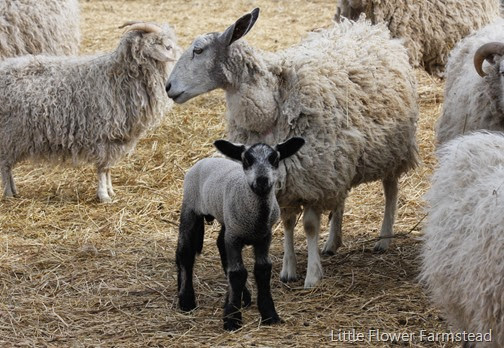 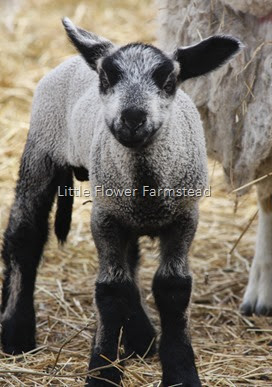 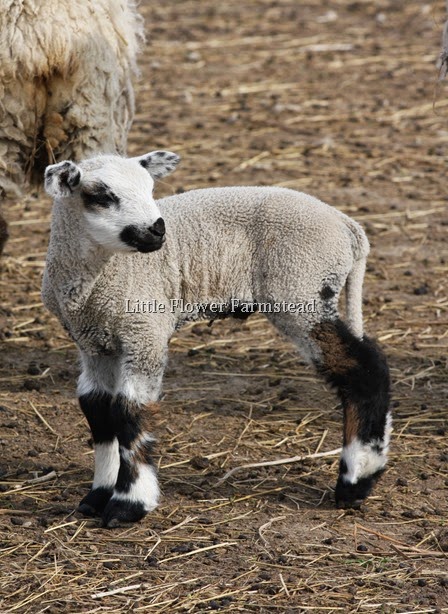 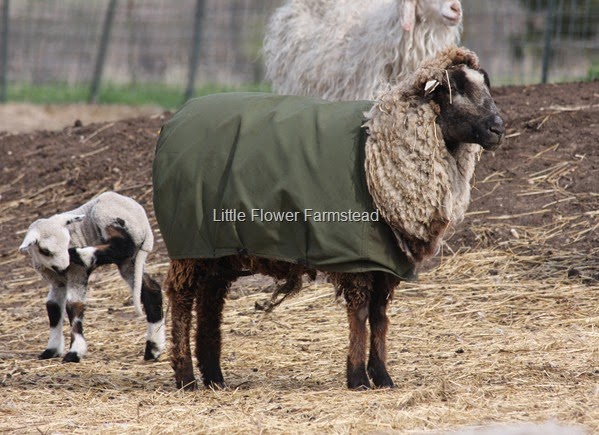 This is Daisy and her son, Daegan. She and Dad, Kayman are CVM ( California Variagated Mutants) Daegan will be  a colored Romeldale as he is not badgered faced. They are a fine wooled sheep with multiple colors. Boy oh boy, did I learn when the description of the CVM were aggressive did I learn my lesson. Being used to Border Leicester and Blue Faced Leicester Rams that were so nice during breeding season. Then there is Kayman who will seek you out from across the paddock running with the pace of a cheetah and all you can do is hang on for the tackle! OUCH!

Posted by Little Flower Farmstead at 7:51 PM No comments:

Skylark is the very first corridale lamb here. She was born during the cold weather. She had a twin boy whom, sadly we lost. She makes me smile when I see those ears and the oh so soft fiber she will be producing. 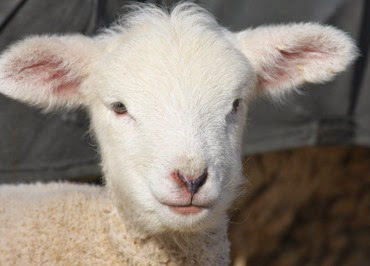 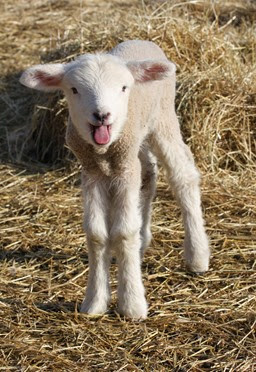 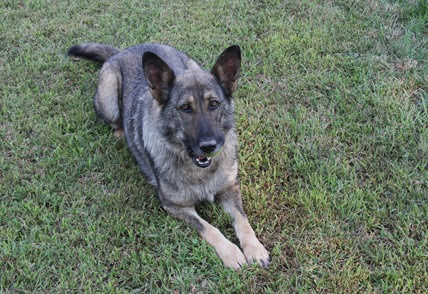 I miss you everyday. Even though you were 12 it is never time to say goodbye. I got you from a shelter and you paid me back ten times fold. You and I spent our first year together while your other new friend was what seemed like many worlds away in Iraq. You were there when no one else was. You kept my sanity. You gave me a reason to keep going.

Izzy, you could chase that tennis ball all day. I will always miss you. There is an empty space on the floor by my feet that will never be replaced. You were a good girl. Thank you for everything you gave me.

Because of our late season drought I am forced to begin feeding hay to the sheepers. We hadn't finished up some paddocks because it was too dry for fence posts. So this evening I was pushing the hay cart just wishing I could head in for a nap! But chores must be done and I have waited all day to visit everyone. So I trudge on following what is left of the sparse grass and  I stumbled upon a little chipping sparrow nest. All constructed of horsehair from the mini horses. That is what most of the chipping sparrow nests were commonly made of but they will settle for dog hair and even human hair.  They have been known to pluck the hair straight from the source. They got their nickname honest. The hair bird.

The oldest chipping sparrow found as of now was 11 years old. 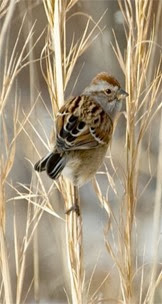 There were many times I could pick out from which dog of mine they used to line their nests. 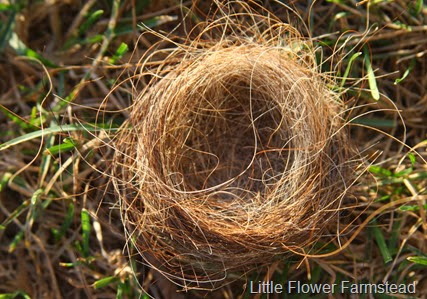 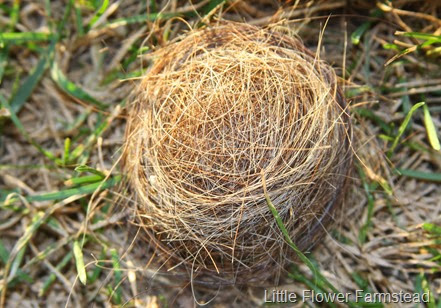 This is one from a few years ago in a pine tree. Tugger’s hair lining the nest. 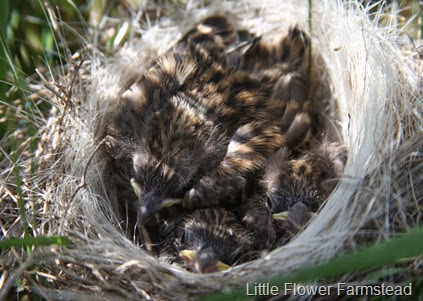 Little Flower Farmstead
Cohabitating with many four legged,furry, hoofed, woolly creatures and some not so furry. My endless list of projects, knitting, spinning, paper cutting.